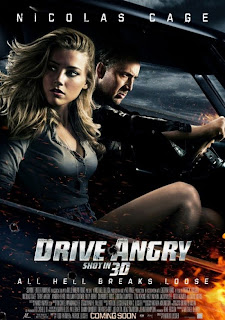 Well let me begin by saying I didn't drive to the theater, but I was somewhat angry even before I arrived that the only advance screening of the film was at 9:00 PM the evening before its release.  Don't get me wrong, I appreciate the opportunity to see movies in advance at all, but I have to review this on FOX 35 in a few hours so I'm going to keep this brief.

Nicolas Cage, Mr. Over-the-Top, is at it again in a WAY over-the-top midnight B-movie in 3D, as a man who will stop at nothing to get his grand-daughter back.  This is a grindhouse film worthy of Tarantino or Rodriguez, and actually much better than their 'Deathproof/Planet Terror' entry in that genre.  It's violence, nudity, and car chases galore with some comedy and supernatural fantasy thrown in.  And the cast is perfect for it, including Cage, character actor William Fichtner in top form, and the generally understated and underrrated David Morse.  And the 3D works pretty well in this film, in true 'comin' at ya' style where they throw everything and the kitchen sink your way.

This is a good bad movie.  Normally I don't like bad movies.  But this one's pretty good ... for a bad movie.