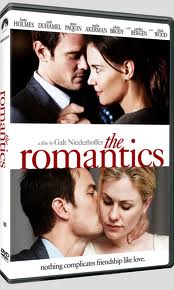 This drama about a group of thirtysomething friends reuniting for a wedding premiered at Sundance in January of 2010 and is now available on DVD.  The cast alone is reason enough to see the film:  Katie Holmes, Josh Duhamel, Anna Paquin, Malin Akerman, Elijah Wood, Adam Brody, and Candice Bergen.  That's a very interesting ensemble.  Wood and Brody don't have a ton of screentime, but I always look forward to seeing their film choices.

The film gradually unfolds the complex, incestuous relationships between the members in this tight group.  It's 'The Big Chill' minus the Motown.  And as far as wedding dramas go, I personally think it's better than both the overrated 2008 film 'Rachel Getting Married' with Anne Hathaway and Noah Baumbach's barely adequate 'Margot at the Wedding' from 2007.  But unfortunately 'The Romatics' is not quite as good as I hoped.  Nevertheless I still found it satisfying and I'm surpised it didn't get a significant release in theaters.  But other reviewers on the internet weren't quite as kind as me, so maybe that's why.