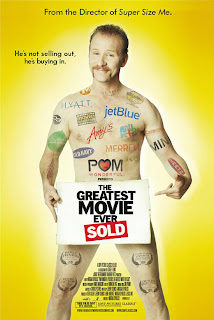 So Philadelphia Cinefest 2011 officially came to an end last night.  And unfortunately I didn't make it to nearly as many screenings as I wanted to.  My final count was only 7, which is just sad.  But you can read all about why I only saw 7 and my review of the first 6 in my Philadelphia Cinefest 2011 Part 1 post from a few days ago.  But last night I had the pleasure of seeing the closing night screening of Morgan Spurlock's 'The Greatest Movie Ever Sold' with Spurlock in attendance affter the film.  For those of you unfamiliar with Spurlock, he's the comedy documentary genius behind 'Supersize Me'.  (And for those of you unfamiliar with 'Supersize Me', shame on you.  It's the classic 2004 doc about Spurlock eating nothing but McDonald's for 30 days. Check it out, because it's really great.)  Anyway, I'm a fan of Spurlock's, and this movie did not disappoint in the least, nor did his lengthy Q&A afterwards.  Great times.

The premise is hard to explain.  The film is about the omnipresence of product marketing.  It's truly everywhere.  We're inundated by advertising on billboards, buses, magazines, and commercials of course,  but the latest trend is for product placement in our TV shows and movies.  So Spurlock decided to make a documentary about getting product sponsorship for the movie he's making ... about getting product sponsorship.  In that respect, it's kind of a movie within a movie.  Ultimately he's trying to find one major sponsor to pony up $1 Million in exchange for getting an above the line credit in the title of the film.  For example, if company Brand X gave him $1 Million to make his documentary, the documentary would be called 'Brand X presents The Greatest Movie Ever Sold', which is about Spurlock trying to get a company like Brand X to pony up $1 Million.  OK I think you get the point.  It's great fun from start to finish and I highly recommend seeing it.  It premiered at Sundance in January and apparantly has received acclaim already.  And it opens at the Ritz East theater in Philadelphia this Friday.

And as for my final thoughts on this year's Philadelphia Cinefest 2011?  Well, as I mentioned in my last post, it was significantly smaller than I've ever seen it, having attended every year for over a decade.  But the strength of the festival has always been the programming, regardless of the size.  Sure, I've seen my share of terrible films at Philadelphia film festivals past.  But I've also seen some fantastic ones that I might not have seen otherwise.  For more on that, you can check out my Philadelphia Film Festival (A Look Forward and a Look Back) post from last October.  And overall I always end the festival happy that I went and sorry that it's over.  This year I definitely feel like I missed out on some good screenings, but I'll be looking out for them to re-appear elsewhere.

If I have one critique of the Philadelphia Cinema Alliance who puts on the festival, it's that they really make no effort whatsoever to get to know their devoted attendees.  Like I said, I've been attending for over a decade, and most years I buy the all access badge.  But I highly doubt the folks who run the Alliance know or care who I am.  By contrast, the Philadelphia Film Society, who now puts their festival on in October, makes a strong effort to get to know their members and bring a sense of community to film fans of Philadelphia.  So my recommendation is to attend both festivals, but look into becoming a member of the Philadelphia Film Society rather than the Philadelphia Cinema Alliance.  They'll leave the light on for you.  (Damn it, that's that brand marketing embedded in my head again!)