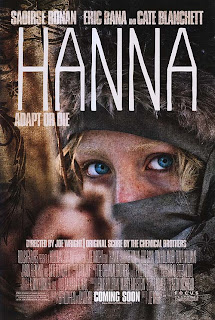 Hanna is a young girl played by Saoirse Ronan. (Don't ask me how to pronounce that, but you've seen her in 'The Lovely Bones' and a great film called 'The Way Back').  She's been raised away from society and trained by her dad, played by Eric Bana, to be the ultimate assassin.  But she feels it's finally time for her to fulfill her mission, which involves an evil CIA operative played by Cate Blanchett in this action thriller.

Let's cut to the chase.  I hated this film.  To me, it was a complete bore and an utter waste of time.  I honestly couldn't find one scene that was worth watching.  And I wanted to.  I really did.  Especially since the trailer showed a lot of potential.  But this is definitely not 'The Professional'.  (If you haven't seen that, then you really should.)  And it's also no 'Le Femme Nikita' or 'Point of No Return'.  It's just a big, dumb, dull, action movie.  I can easily say it's one of my two least favorite films of the year so far.  (I debated whether it takes the prize from 'The Rite' but decided against it.)

Now, with that said, I must say that select people in the audience really seemed to be enjoying the film.  And the few reviews posted on Rotten Tomatoes are quite favorable.  And Entertainment Weekly gave it a B+!  I just don't get that at all.  I'm usually in synch with the critical mass, but we're going to have to agree to disagree on this one.  Or maybe I missed something.  Well, I can't explain the critics, but with regard to the advance screening audience, and I've said this before, I think some people are just really happy to be out of the house and doing something for free.  I, on the other hand, would have preferred to be home burning my money.  My opinion is that you should skip it and rent 'The Professional'.  Or, for a better Hanna(h), may I recommed 'Hannah and Her Sisters'?
Grade: D (and dangerously close to an F)
Posted by Flieder on Film at 5:12 AM