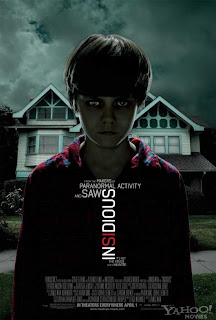 Director James Wan and writer Leigh Whannell, the guys behind the 'Saw' franchise, are back with a new horror film that's kind of a return to the horror films of yore.  It's basically a haunted house flick with a 'Poltergeist' feel.  Rose Byrne and Patrick Wilson play the unsuspecting couple who encounter trouble of a supernatural nature when they move into a new house that couldn't look more like a haunted house.  I mean, seriously, what did they think was going to happen when they bought it?

If you've been a reader of my blog since day one, you may recall I already reviewed this movie 6 months ago when I saw it at the Toronto Film Festival.  But since it's been a while, and since it was the 5th movie I saw that day, at a midnight screening no less, I figured I'd revisit it and see if my review of it has changed.  And for the most part it hasn't.  It's a fun film for sure, but a lot of the scares are pretty cheap, with spooks jumping out at you and shrill sound effects to punch up the nervous energy.  Those kinds of scares are just too easy for my taste.  Although, the third act really takes things to an unexpected place, quite literally, and that is by far the best part of the film.  So there is a lot to like here, but as much as I dislike the 'torture porn' genre it spawned, I have to say that 'Saw' was a better film.  And 'Scream 4' in theaters now is a lot more fun.  Nevertheless, this one is a spooky ride and horror fans will certainly have a good time.