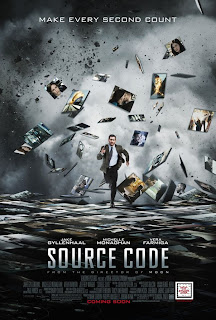 Director Duncan Jones, son of David Bowie, is back with his second feature film.  His first was the underseen art house atmospheric sci-fi flick 'Moon' starring Sam Rockwell, which Jones also wrote.  And if you haven't seen that one I definitely recommend it.  This time Jake Gyllenhaal is at the helm in this high concept sci-fi action thriller with a sprinkling of comedy and romance.  Jones plays a confused military captain who's being sent back in time over and over by a mysterious group of people to a train with a bomb on it.  Each time he takes over the body of the same man onboard the train and has 8 minutes to gather as much information as to who was responsible for the bomb.  It's 'Groundhog Day' meets 'Quantum Leap' and perhaps with a bit of 'Terminator's can-we-go-back-in-time-and-change-the-future concept.  Michelle Monaghan and Vera Farmiga co-star.

Although I wanted it to be, this film is not perfect.  I really wanted to give 'Source Code' my first A of the year but I just can't.  However, in the sea of trite, predictable, regurgitated material I've seen so far this year, it's a welcome pleasure even if it's not as great as it's potential.  It's at least ambitious and entertaining.  And Jones was at my screening in person and participated in a very interesting Q&A afterward.  Based on this film, 'Moon', and the Q&A, I'm definitely a fan and really look forward to his future projects.  He's no longer David Bowie's son to me.  He's a solid writer/director and David Bowie just happens to be his father.