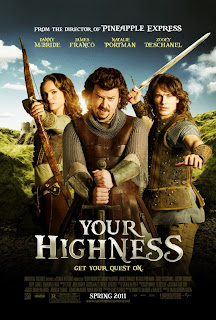 Danny McBride, James Franco, and 'Pineapple Express' director David Gordon Green are back together again with an R-rated crass comedy fantasy film, and this time they lured Natalie Portman and Zooey Deschanel along for the ride.  This parody of quest / fantasy films blends situations from usual suspects like 'Robin Hood' and 'Clash of the Titans'.  But there's plenty of sexual humor and forced F-bombs thrown in to constantly remind you it's kind of a spoof.

I could say I liked this movie better the first time I saw it, when it was called 'Robin Hood: Men in Tights', and it's certainly not as good as Mel Brooks' films, but we don't get many comedy fantasy films so it still felt fresh enough to be enjoyable.  It's entertaining enough for a few laughs assuming you like crude humor, but not much more.  Frankly, Portman and Franco are too good for a film like this, but I suppose I understand they wanted to stretch and do something different.  This is really more of what you expect from 'Eastbound and Down's McBride.  I can say I found it slightly more palatable than 'Paul', the recent spoof on alien films, featuring the voice of fellow 'Pineapple Express' alum Seth Rogen, but I was still sporatically drifting off and waxing nostalgic for Mel Brooks.  But for those of you who liked 'Paul', this one is right up your alley.