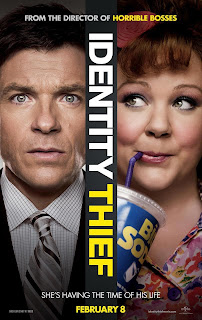 Jason Bateman plays a regular guy with a normal office job, a pretty wife, and two adorable girls.  Aside from not being able to save enough money for their future, his life is pretty good.  That is, until Melissa McCarthy steals his identity and turns his life upside down.  So he's off to track her down and bring her back to Denver to make things right in this outrageous R rated comedy.

It's ironic that this film is entitled 'Identity Thief' since it's pretty much stolen its identity from 'Due Date', 'Planes, Trains, and Automobiles', 'Midnight Run', and pretty much every quarrelsome-twosome road trip comedy ever made.  And McCarthy has obviously stolen the identity of Mimi from The Drew Carey Show mixed with John Candy's Dell Griffith from 'Planes, Trains, and Automobiles'.  Going on premise alone, this movie is a disaster.  Nothing about it makes sense or seems believable in the slightest.  But the primary function of a comedy is to make people laugh, and on that merit alone I must admit it adequately succeeds.  Bateman's trademark dry wit and intentionally expressionless face juxtaposes well against McCarthy's manic slapstick over-the-top comedy.  On likeability alone, primarily due to the casting, this one is probably worth your time.  Just promise not to remind me about the ridiculous eye-roll of an ending and I promise I won't steal your credit card number when you're not looking.  (Tee hee ... my fingers are crossed behind my back.)