Love Is All You Need 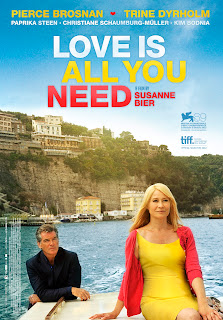 Ever since 'Remington Steele' in the 80's, I've always been a big fan of Pierce Brosnan.  Arguably the coolest guy who ever lived, it's not hard to imagine him as James Bond.  But what always impresses me, is when Brosnan frequently departs from the blockbusters to do softer fare.  His performance in the underseen melodrama 'The Greatest' is nothing short of the greatest (though be sure to have a box of tissues handy.)  And even his attempt at singing in 'Mamma Mia' which received mixed reviews I found to be utterly charming.  (Polished singers often bore me.  Give me an amateur trying his or her best any day.  Woody Allen's 'Everyone Says I Love You', anyone?)  So this Danish film where he plays a successful businessman who has sworn off love but opens his mind and his heart to a married woman recovering from cancer but underappreciated by her husband appealed to me despite its trite sounding plot.  My thought was, if it's good enough for Brosnan, it's good enough for me.  Generally that's true.  In this case, not so much.  The scenery, primarily in Italy, is beautiful.  And the performances are fairly heartfelt and reasonably good,  But there's zero chemistry between anyone in the film and a movie like this lives and dies by that magically chemistry.  Unfortunately this is only worth the time for romance die hards.