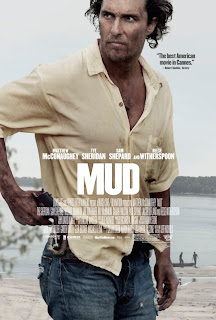 In this drama, two young boys living in destitute Arkansas, encounter a mysterious man living alone on an island and try to help him.  'Mud' premiered at Cannes last May and surprisingly took a year to open.  And that's crazy because this is a quality film.  The supporting cast is superb, including Reese Witherspoon, Michael Shannon, Ray McKinnon, and Sarah Paulson.  But it is the leads, McConaughey and Tye Sheridan, who really give this film its heart.  (And that isn't to say it's corny, because it's not at all.)  But it is the kind of film that, if Oscar voters had better memories, might be awarded come February.

And on a related note, Matthew McConaughey has really come into his own. Since his amazing performance in 1996's 'A Time to Kill', he has mainly starred in forgettable roles in unremarkable movies, and became most famous as the guy who takes his shirt off whenever he gets the chance. (This reputation is exacerbated by Matt Damon's now legendary impression of him on virtually every appearance he does on The Late Show with David Letterman.)   But over the last year he starred in five films: 'Bernie', 'Killer Joe', 'Magic Mike', 'The Paperboy', and now 'Mud'. And even more remarkable than the number, he is the best part of all of them.  I really look forward to seeing what's next from him.  And, as a straight male, Mr. McConaughey, I say take your shirt off anytime you like.  You've certainly earned that right.