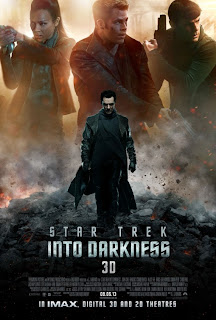 I'm not a Trekker.  Yet I am a big enough fan of the Star Trek universe and its super fans to know that they prefer to be called Trekkers and not Trekkies.  And as a fan, it's been a long four years waiting for J.J. Abrams follow up to his exceptional reboot of the original cast classic.  In 2009, uber-geek Abrams wowed Trekkers, casual fans, and newcomers alike by ingenious storytelling and truly perfect casting.  He managed to capture the essence of each character from the original series, allowing a new generation to experience a reimagining, but without invalidating the beloved original.  So how do you follow that up?  Well, Abrams is particularly smart about one thing:  Keeping his mouth shut.  He is extremely hush hush about his projects, being one of the few that understands that the anticipation of not knowing is more fun than knowing everything going in.  It was eventually revealed that the great Benedict Cumberbatch (best known as BBC's Sherlock) would be part of the cast.  And rumors floated around that he might fill the shoes of the greatest enemy the original cast ever faced, Khan, as originally chillingly portrayed by Ricardo Montalban in Star Trek II.  Well I won't confirm or deny that, but I will say that this movie totally delivers.  It's 2 hours and 12 minutes of larger than life action mixed with laughs, quality storytelling, and plenty of great homages to the original.  I loved it, though not quite as much as the last one.  I look forward to the next installment and may the franchise live long and prosper.