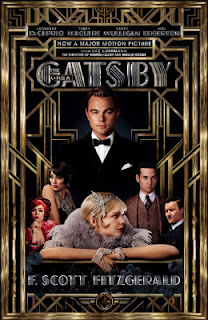 Director Baz Luhrmann (known for his lavish productions 'Romeo + Juliet', 'Moulin Rouge!', and 'Australia') brings the F. Scott Fitzgerald classic we all read the Cliffs Notes to in high school to the big screen yet again.  And for those of us who've seen more movies than have read books, the most memorable telling of this tale to date had been the 1974 version featuring Robert Redford, Mia Farrow and Bruce Dern.  And while that film won the Oscars for Best Costume Design and Best Music, it is largely considered to be a disappointing bore.  Now, 39 years later Luhrmann tries his hand, with Leonardo DiCaprio in the lead as the mysterious and wealthy Jay Gatsby, Carey Mulligan as the object of his affection, and Tobey Maguire as the narrator and eyes and ears of their story.  It marks the reunion of Luhrmann and DiCaprio who collaborated on 'Romeo + Juliet'.  And it is very much a Luhrmann film.  And by that I mean it has wonderful style, with lavish sets and clothes, and an almost dreamlike quality.  It features a modern day soundtrack despite it being a period film.  And the ensemble cast is good, as is the case in all his films.  And for his first time, Luhrmann uses 3D to try and enhance the realism (which it does but it also takes away from the natural brightness of what he was trying to achieve.)  But as hard as I tried to appreciate all there is to appreciate, as with its predecessor I just found it hard to stay awake.  Honestly, the most exciting part of the evening was when the drunk woman three seats down from me, slurrily cheering her love for Leo when he first appeared on screen, got removed by security.

Bottom line:  The ladies are going to enjoy swooning over DiCaprio, as always.  But the men are going to find it dull.  And even as a seasoned period film watcher, I have to agree.  Expect mixed reviews on this one.