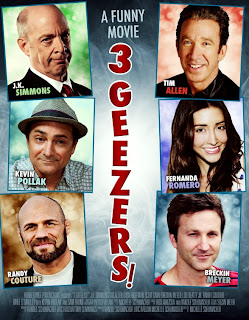 How does a film featuring the always amazing J.K. Simmons as well as cameos by Kevin Pollak, Tim Allen, Scott Caan, and Breckin Meyer open in limited release in theaters and on Video On Demand without any buzz or marketing whatsoever?  Well, for one reason, it's terrible.

Simmons plays himself as an actor researching a role as an 85 year old man and follows three old men at an old age home.  He quickly learns that these three geezers are still full of life and every bit as crass and troublesome as your average teenager.

This is total amateur hour, and you can tell right from the start what you're in for.  The comedy is painful, the acting is pathetic, and the filmmaking wreaks of inexperience.  So how did it attract Simmons to begin with?  A little research of my own uncovered that first time director Michelle Schumacher is a.k.a. Mrs. Simmons and co-writer Randle Schumacher is her brother.  Mystery solved.

Grade: D- (and dangerously close to the big ol' F)