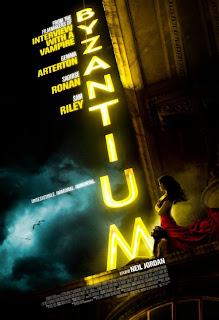 I'm not real big on the vampire thing, mainly because the tweens and the Twi-hards have turned scary, blood sucking Transylvanians into pale, brooding teenagers with perfect hair and too much eyeliner.  Frankly, the whole vampire thing needs a makeover.  Though the Swedish 'Let the Right One In', followed by the even better American remake, 'Let Me In', took a giant step in the right direction.  They marked a return of the atmospheric, less mainstream, and more indie vampire film.  And 'Byzantium' continues on that path, and adding one super sexy vampire to boot.  Gemma Arterton and Saoirse Ronan play sisters who also happen to vampires.  They aren't evil, but rather are just trying to survive, going from town to town, and doing what they need to do.  Big sister Arterton (who plays a polar opposite character here than what she does in 'Unfinished Song') works as a prostitute (and a smoking hot one at that) and takes up at the Byzantium hotel to expand her business.  Director Neil Jordan succeeds at creating a very atmospheric film, with very memorable characters.  I only wish the storyline were as fleshed out as the necks of these vampires' victims.  It's good, but could have been better.