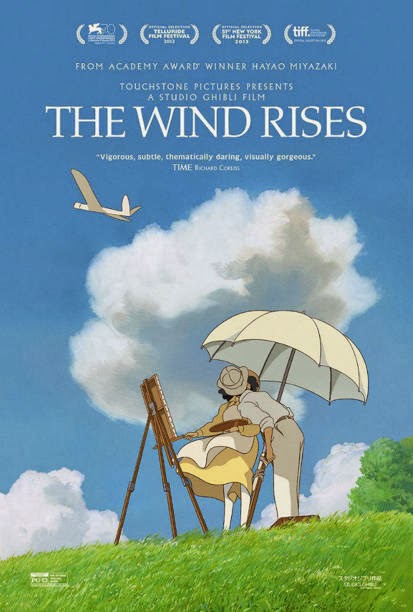 Those who know me and follow my blog know I don't care for animated films.  And among my least favorites are Japanese Anime.  I don't get them at all.  Even the most beloved, many of which were made by Hayao Miyazaki (including 'Spirited Away', 'Princess Mononoke', and 'Howl's Moving Castle'), are pure torture for me to sit through.  I'm not proud of this, nor do I mean it as any insult.  The fact is they just bore me terribly and I can hardly pay attention to them.  And as hard as I try to see in them what so many others do, I just don't.

'The Wind Rises' (which could easily have been called 'Jiro Dreams of Airplanes') pays homage to Jiro Horikoshi, a man obsessed with airplanes since childhood, who eventually designed fighter planes during World War II.  Yes, there is historical value, as well as plenty of intended emotion in Jiro's passion for his work and his soul mate.  And yes, this will be Miyazaki's final feature length film, as he announced last year.  And yes, it was Japan's highest grossing film last year.  And yes, it has been nominated for and won countless awards from prestigious festivals and critics associations worldwide, including Best Animated Feature at the Academy Awards this Sunday.  But its two hour and six minute runtime felt like an eternity for me.  And therefore, even though I'm not happy doing this, as it opens me up for mockery by my fellow film critics and film buffs, it would be totally phony of me to give 'The Wind Rises' anything else but ...

Who is this movie for?  Apparently it's for virtually every film critic and film buff but me.  You probably know by now if Japanese Anime is for you.  It's not for me.

Note: I watched the version in Japanese with English subtitles.  Another version is now being released in America that's dubbed with a voice cast including Joseph Gordon-Levitt, John Krasinski, Emily Blunt, Martin Short, Stanley Tucci, Mandy Patinkin, William H. Macy, and Werner Herzog.  Perhaps I would have enjoyed that version better.  I don't know.  But my grade only applies to the version I saw.
Posted by Flieder on Film at 12:02 AM