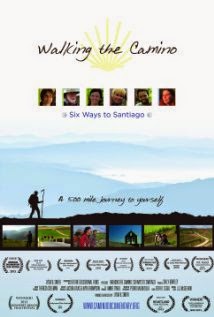 I'm not an outdoorsman by any means.  In fact I've always described myself as more of an indoor cat.  I've never been camping, and I joke that my idea of it is a hotel of less than 3 stars.  And I would never consider running a marathon.  To me, it just sounds exhausting and boring.  But yet every time I'm exposed to stories of those who do long walks, I am always inspired.  When I read 'A Walk in the Woods' about a decade ago, I felt an unexpected desire to experience the Appalachian trail.  And when I saw The Way in 2010, a film made by Emilio Estevez, starring his dad, Martin Sheen, who walks a 500 mile trail in Spain called El Camino, I was inspired and moved in a profound way.  (And I'm rarely inspired or moved.)  Even after watching that film a second time in 2011 I was just as inspired and just as moved, and wondered if I could ever do that.  And now we have this documentary that follows several regular people from different countries and with different reasons for being there attempt the pilgrimage.  And it just looks like a great life experience!  Of course sitting in a comfortable theater for 84 minutes is a world away from the 30+ days it takes people to walk the trail.  So it's hard to say if I could or should ever attempt it.  But I do want to!  Who's with me???

Now, as far as the film itself, it's a very enjoyable doc and if you're at all interested in these kinds of spiritual journeys then I recommend seeing it.  It's in very limited theatrical release and playing for one week at the Roxy in Philadelphia, followed by a run in NYC.  But The Way is way better and I really can't recommend that film enough.

Who are these movies for?   Fans of nature, people, and spiritual journeys.
Posted by Flieder on Film at 12:00 AM