Do I Sound Gay? 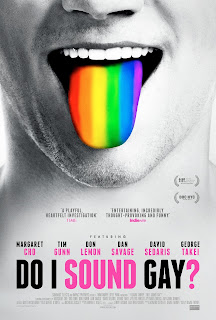 I think it's fairly common to be uncomfortable with the sound of our voices, particularly when we hear them recorded and played back.  I will share with you that the first time I watched myself on TV I was appalled by the way I looked and by the way I sounded.  I wanted to crawl under the bed and die.  Though, strangely, over time, and after many rounds of attempted improvements, I became more comfortable with the way I looked but not so much by the way I sounded.  How do people stand listening to me?!?

But even dating back to the first time I heard myself on the answering machine, I've always been fascinated by the disconnect between how we sound and how we think we sound.  And also by speech patterns in general.  Do people speak the way they do by choice?  Is it learned behavior or biological?  Why do gay men sound like gay men?  This documentary addresses these questions, and does so in a very interesting and entertaining way.  And interviews with Dan Savage, David Sedaris, George Takei, Tim Gunn, and Margaret Cho, and clips of Louis C.K., Charles Nelson Reilly, Paul Lynde, and more keep it a fun watch.

Who is this movie for?  You don't have to be gay to enjoy Do I Sound Gay.  With its short 77 minute runtime, I think anyone and everyone would enjoy this doc.
Posted by Flieder on Film at 12:00 AM