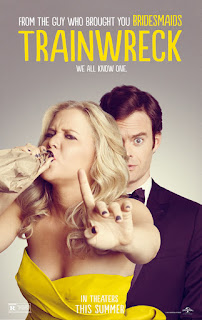 Is it just me or is Amy Schumer everywhere these days?  She seemed to become the "it" girl overnight, though I can't say I really even knew who she was other than from seeing quotes taken from her stand up, stories about her addressing body image insecurities, hearing other comedians speak favorably about her, and an occasional talk show appearance here or there.  She seems to make news because she's a female comedian with no filter, and has become the poster girl for raging against having to be a perfect 10 to be a success in TV or film.  (You don't have to tell me!  I was given the boot from TV and I'm at least a 9.5 ... with makeup!)  But until now I hadn't really seen her do anything.  (Yes, I am aware she has a show called Inside Amy Schumer, but I haven't seen it.)  Anyhoo, now that I have seen her in a lead role, I can indeed confirm ... she's funny.  She does indeed lives up to the hype.  And this is another great female-led, female written comedy directed by comedy the guru himself Judd Apatow.  It's not groundbreaking, but it's funny.  And that's surprisingly rare for comedies today.

Who is this movie for?   If you like Bridesmaids, Apatow films, Schumer, Bill Hader, and adult comedies in general, you'll enjoy this very much.
Posted by Flieder on Film at 12:16 AM