Posted by Flieder on Film at 11:30 PM No comments: 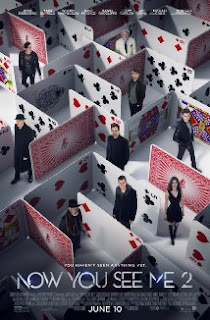 I really wanted to love Now You See Me 2.  It has an amazing cast, including Woody Harrelson, Jesse Eisenberg, Mark Ruffalo, Morgan Freeman, and Dave Franco, returning from the first, and adding Daniel Radcliffe and Lizzy Caplan to an already packed ensemble.  It's like the new Oceans 11 (which I love) and is a breath of fresh air amongst the other spring/summer comic book and animated films.  But as much as I wanted to love it, I couldn't escape the constant feeling throughout that I should be loving it more than I actually was.  The problem is, it's just not as clever or well made as the filmmakers clearly think it is.  At least, I don't think it is.  Truthfully, I found it confusing.  And I can't tell if that's because I'm dim or because it's poorly made and/or incoherent.  At all times, I felt like it was building towards a mind blowing reveal, but really my mind was never blown.  The magic seemed completely unrealistic and the explanations unbelievable.

Who is this movie for?  If you enjoyed the first, you'll probably enjoy the second.  But I wish it were a bit better.  There's no denying it's still kind of cool, and I may enjoy it better after seeing it again, but my initial opinion is that it's too much smoke and mirrors. 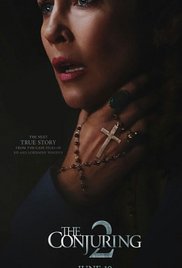 Back in 2013, The Conjuring, James Wan's latest horror, was very well received by audiences.  But it didn't stand out to me as much better than any of the many other haunted house / demonic possession movies.  To me, they're pretty much all the same.  Sure, it had decent production value and a fairly good cast.  But at the end of the day, it relies on cheap scares to entertain, rather than a smart script.  And I pretty much feel the same about The Conjuring 2.  It's well made but in my opinion it doesn't bring any pleasant surprises.

Who is this movie for?  Horror fans will be entertained.  But to me, you've seen one haunted house / demonic possession movie, you've seen 'em all.  And I expect more from the guy who gave us Saw.